Take Your Baby to Work When I tell people that I was able to bring my son to work with me until he was six months old, I am often met with others telling me how great of an idea that is and that I was lucky to have had that opportunity. Believe me, I did not take that for granted. Knowing that my next little one will also be joining me in the office until he/she is six months old is a big comfort because I know the impact it makes on our breastfeeding relationship. My son spent the vast majority of his first six months of life by my side. He continued to breastfeed until he was 23 months old, and was actually quite difficult to transition to taking bottles at daycare. I learned a lot with my son, and I plan on using what I learned to make sure the next time around goes even more smoothly.

There are many things to consider when bringing your baby to work with you, especially when you have a full-time job, because you basically spend as much time at the office as you do at home. This can require strategic planning and sometimes doubling up on supplies. I made sure that I always had diapers, wipes and extra clothes (for him and myself) in my desk. I also had a travel bassinet and a bouncer that stayed in my office. It’s not all sunshine and daises when you are in the middle of the work day and have to change yet another diaper on a tired grumpy baby, but we made it work. When he was old enough to sit up, I brought a walker in for him to be able to move around a bit. He really liked that! He also began crawling while at work with me. It’s so nice to not have to miss those milestones! He would often crawl out of my office and down the hall to visit my coworkers. That’s when I knew it was time to get him started in daycare. A mobile baby is much more difficult to bring to the office.

The most important thing I had to remember, was that my son was my responsibility. I was not bringing him to work with me so that I could save on daycare and have my coworkers help watch him; I was bringing him to work so that he could continue to feed on demand and spend as much time with me as he needed. I did a lot of baby wearing and he came with me everywhere. I didn’t let the fact that my baby was with me stop be from being an effective employee. The program can only work if you are actually working. Sometimes that involved creative thinking on how to accomplish a task safely and effectively, but at the end of the day, the job was done. At home, I made sure I had some “me” time. I didn’t need a lot of it, but it was nice to run to the store by myself once in a while, or take a hot shower without being needed. Being a mom is tough, and support from both the work place and at home makes a huge difference.

It was difficult at times to juggle being a mom, and an employee. It was also one of the most rewarding experiences for myself to know that I was there for the very early milestones and my coworkers loved the opportunity to get baby snuggles as often as they needed. This year’s World Breastfeeding Week focus was on Sustaining Breastfeeding Together. The policy that The Milk Bank has that allows their employees who are breastfeeding mothers the opportunities to bring our babies to work with us is a prime example of this mission. I truly have the best job in the world.

In October, I will be back at work again with a new little one. I definitely feel more prepared having been through this before. I am excited to once again have this opportunity, and I’m sure that there will be many pictures shared on social media in the near future! 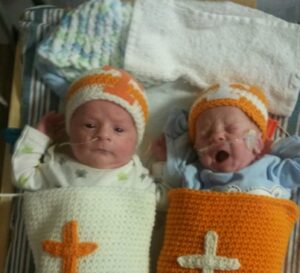