We found out we were pregnant in the spring of 2018. My husband and I had been married since 2011, and this was our first pregnancy, so we were really excited. I had known of friends to have miscarriages, though, so I made my husband keep it a secret till we were out of our first trimester. Once we had cleared that hurdle, we wanted to share the news with family members in person.

As we broke the news that weekend, our families were all excited, too – I know on my side, my parents had thought they were done getting grandkids, so they were really excited to have a new birth to celebrate. On my husband’s side, the only grandchild so far was his oldest, my stepdaughter, so they were pretty excited to have a new grandchild too, especially his younger siblings who are close in age to his oldest and were excited to feel more like aunts than cousins to the newest member of the family. At the end of August, we shared our news more widely over social media. We had gotten through the first trimester, and so I felt it was safe to start really believing we’d be bringing a baby home in January.

On September 10th, we had our 20 week appointment (I was actually just two days shy of the 21 week mark). Even though we had decided we wanted the gender to be a surprise, I still wanted my husband at that appointment since it felt like such a big milestone. I ended up being grateful he was there as the tech left the room to get a doctor, who came in and did her own check and then had to tell us “We can’t find a heartbeat.”

We waited to meet with my doctor so we could schedule me to be induced later in the week. After a somber drive home, we made the calls to our family to let them know the news and figure out what our future held. I went in to be induced September 14, and delivered my first, a baby girl, at 1:55 a.m. on September 15. We named her Cheyenne Hope.

We were unable to see her (my doctor had warned me that that might be the case, since we weren’t sure when she had passed and what condition she would be in); in fact the first nurse had apologized that she couldn’t even get handprints or footprints for us (though a nurse who came on at the next shift managed to get us footprints) and by 9 or 10 a.m. we were on our way home.

To say we were broken-hearted would be an understatement; we had been pregnant, but were leaving the hospital with only a box of items meant to comfort us in our loss.

That night, my milk came in; the hospital staff had said it might, for how far along I was, and offered solutions like cabbage leaves and a tight-fitting sports bra. By Thursday of that next week we were able to bury her in my home church cemetery, near other family members.

I was genuinely surprised when we got pregnant again so quickly, within a couple weeks of what would have been Cheyenne’s due date, and spent most of the pregnancy worrying that it would end the same way. We shared the news with our parents much sooner, but only because I wanted to be able to turn to them for support if things went badly; and hesitated telling much family beyond that until much later.

When Willow was born so early, for some family members it had only been a few weeks that they had even known we were expecting! And Willow being in the NICU, was how I found out about The Milk Bank and the possibility of donating milk. I immediately thought back to those days after Cheyenne’s birth and the effort I made to get my milk to stop coming in, and wished I had known I could have done something productive instead.

I was glad to hear that it existed, even though Willow hadn’t needed it. It also saddened me a bit that I hadn’t heard of this sooner. After we lost Cheyenne, the only guidance I was given was tips to get my body to stop producing as quickly and painlessly (though, not pain-free-ly) as possible.

I wished I could go back in time with this new knowledge and do something that felt like it could have helped someone else despite our loss. I still wish it; to have had my milk come in and had to deal with leaking as I stuffed my too-tight bra with cabbage because I felt like I had just squandered a chance to have helped a baby who was alive but struggling. But I didn’t know.

As Willow has grown, and I have continued to pump every time she gets a bottle, I’ve built up quite a stash of milk. While I knew I wanted this stash so that if my body decided to stop cooperating before we made it to a year, I also kept the Milk Bank in the back of my mind. And so, even as over the past few months there has been no doubt that there would be enough in our stash to get Willow to a year (and no doubt that Nathan was getting frustrated with the state of our freezer, which slowly saw the eviction of such products as Ben & Jerry’s containers, excess lunchbox ice packs, boxes of Thin Mints and Samoas, and my fancy ice cube mold shaped like a basketball – and still had very little room for, like, meat and foods for OUR consumption), and as her average bottle intake has hovered between 120 and 140 milliliters while my average pump production would net a new 135 to 190 milliliters to replenish, I still was pretty diligent about pumping, storing, and tracking milk/milk production with every bottle she took.

I remembered when Willow was introduced to her first couple milliliters of milk; watched how it was slowly, slowly, slowly increased until she was getting 45 milliliters per bottle by the time she was released. (The fact that I still refer to all of her consumption, and all of my output, in milliliters instead of ounces is maybe a giveaway of just how much it stuck with me, that her earliest feedings had to be measured in so small a unit, not even half an ounce.) I knew how much that excess I was creating could go toward helping those other babies going through the NICU, who still had yet to build up to 10 milliliters, or just had to be getting another five milliliters per feeding before they were cleared to go home. Every time she took a bottle of 90 and I pumped 120, I thought, “I could replace the 90 I just pulled out of the freezer and still have enough left over that it would have made for three feedings for her back in August!” Every pumping session was a mental calculation of how much that overage would have accounted for in her earliest days in the NICU, or how many bottles it would have equated to as she neared the end of her NICU stay.

So I was excited when I finally was cleared to be a donor for the Milk Bank. I loaded up the car with coolers and headed to Lutheran Hospital, the nearest milk depot, to turn over 234 bags of milk that totaled 31,910 milliliters. While that milliliter measurement is still the one that means the most to me, I mathed it. In one fell swoop, y’all, I donated 1,079 ounces, or about 8.4 gallons of milk.

So, I (with an assist from Nathan) rewarded myself (and the family whose freezers I took advantage of these past months) with an ice cream cake. Because there’s finally room in the freezer for leftover ice cream cake. For now.

I’m sharing my story for two reasons. First, awareness of the Milk Bank. I really wish I personally had known about it sooner; they also need not only milk donations but monetary ones, as doing all the testing and processing to make sure that the milk being distributed is safe, is not free. I know there’s no shortage of organizations in need of financial support these days and I begrudge no one who can’t help The Milk Bank, but if this is a matter dear to your heart and you want to help but can’t donate milk, there are still ways you can contribute.

We’re grateful to Marcy, the “Dairy Queen,” for sharing her story and family pictures with us. Marcy touched on a lot of important programs at The Milk Bank. You can find information on becoming a milk donor, a financial donor, our bereavement donor program, as well as how to become a convenient donation drop off spot like the hospital near Marcy – on our website. You can always give us a call at 317-536-1560. 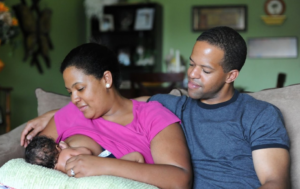 I Will be Forever Grateful: Stories of Partner Support