Breastfeeding, A Pandemic, and a Mom Set on Milk Donation

We’re grateful for this guest blog post written by Natalie, one of our amazing Milk Donors. If you would like to write for us – get in touch!

My first child was born in 2017, completely perfect and ready to nurse. I was fortunate to breastfeed her for nine months, but found myself out of milk by then, thanks to my inconsistent pumping habits at work. I was sad, but the transition to formula was easy, thanks to her wonderful daycare. As the months continued, I regretted my lax approach to pumping because I’d wanted to donate to The Milk Bank.

Earlier that summer, we went to the Indiana State Fair. We were still adjusting to life with a baby and our daughter, was nursing full-time as a five-month-old. I wasn’t yet comfortable nursing in public and was becoming desperate for a cool, comfortable place to feed her amongst the sweat of summer. Luckily, we came across The Milk Bank’s lactation station, which was housed in a luxurious camper that a local dealership had provided.

I felt like an absolute queen in that camper! Not only did it have air conditioning, but it had multiple comfortable places to sit, nursing pillows, a changing station complete with supplies, and a fridge full of water. The Milk Bank left a lasting impression on me and I wanted to be a part of the organization in some way. While I wasn’t able to donate with our daughter, I was able to contribute financially and through sharing the good work the organization does with anyone who would listen.

When our son was born in June 2020, he was rushed to the NICU shortly after birth because of low blood sugar and temperature. I’d had an initial assessment of gestational diabetes during my first test while pregnant, but it later was debunked. Due to his birth situation, I wonder if I may have developed it at some point. My husband went along with him to the NICU while the team cleaned me up. Once I arrived at his room, they had begun administering treatment to help get his blood sugar at the right level. This process continued while they checked his blood sugar to see if he would maintain the ideal level. To be released from the NICU, he would have to maintain his sugar on his own. He was able to maintain his blood sugar and be released in just under 24 hours!

As he grew, he proved himself to be a great nurser, just like his sister. I returned to working from home, a temporary situation due to the pandemic. He stayed home with me which, was a wonderful experience for both bonding and maintaining a nursing regimen. I’m thankful to have gotten the experience of my career and serving as a primary caregiver, but it further reiterated that these are two separate and distinct jobs!

The sheer exhaustion was made a little bit easier thanks to the flexible wardrobe and nonexistent commute.

In January of 2021, we had a massive surprise, brought on by one of the most benign baby foods I’m aware of: rice. Our son had just started trying out some introductory foods as he was now sitting up. I’d given him a few bites of banana baby food and let him gnaw on a rice rusk when shortly afterwards, he vomited. We wrote it off as a baby bubble burp, cleaned him up, and then my husband went on his way to run an errand.

He had barely made it down the street when I called him to report that our son was now projectile vomiting. We ended our evening with an ER visit that suggested we avoid rice and bananas for a couple of weeks and make sure he stayed hydrated. A couple of weeks later, he had rice cereal and we were back in urgent care. Thanks to my husband’s excellent Google skills, he came across a condition that sounded just like what our sweetheart was experiencing: FPIES or food protein-induced enterocolitis syndrome, a type of food allergy impacting the gastrointestinal tract. We were referred to an allergist who confirmed this is what our son was dealing with and put us on a strict food introduction schedule that also disallowed us from trialing dairy until 12 months. Our son was now on team 100% breastfeeding. Keeping this going was relatively easy, as my supply was robust thanks to his young age.

We continued to work from home together and I pumped only to get myself comfortable or build a small stash for excruciatingly rare babysitting opportunities. I mostly used the Haakaa pump for this, so it was extremely easy to do this passively. My work called everyone back into in-office work in June and I reluctantly packed up my pump for one of my least favorite tasks.

Thanks to my growing love for TikTok, I came across a woman who was urging busy moms to get an in-bra pump. Prior to having my second baby and before the world turned upside-down, I was considering purchasing one of the more expensive models. I have a demanding job and possess little patience: any pause I have to take from typing or listening thanks to a bulky and loud pump was not ideal. This was also part of why I’d found it so hard to maintain a solid schedule while pumping for my daughter.

I got my in-bra pump during my second week back in the office. This $65 investment emboldened me so much during its five months of use such that I wore it around the office, during meetings, walking to the parking garage, and while driving. This pump made it so easy and gave me so much confidence that could keep up with my baby’s needs.

Later, as my son came to terms with cow’s milk at daycare, I backed down the breastmilk I provided to him. Then, I was producing about 12 ounces a day through three pump sessions while pursuing my goal of a 100-ounce donation to The Milk Bank. Every day, I got so excited to bag up and store my milk in the deep freezer once I’d battled my commute and kid pickup. Once I hit my 100-ounce target, I completed the form online to donate. It was finally going to happen!

The Milk Bank’s form was easy to fill out and the following screening process was a breeze. I was emailed documentation to take to my testing site for my blood draw and scheduled my appointment. A couple of weeks after my draw, I got the all-clear to donate! At this point, I’d stopped pumping at work, because it was time to get my son, as darling as he is, off of mama. He’d been displaying some poor eating habits that now have him in feeding therapy, a side-effect of his FPIES-induced food introduction. We introduced a new food about a week at a time and, believe it or not, rice or rice products are in practically everything, especially early training foods like puffs.

When I went to package and label all of my storage bags with my donor number, I got more emotional than I expected. Laying out my 228 ounces of frozen milk across my kitchen island, I reviewed the dates I’d written on them. Some dates brought back happy memories, others brought back some of the saddest.

Each one had my little one’s sweet name on them and most had a scrawled heart as well. Some were more translucent, others rich and yellow. All of them are testaments of a labor of love for my babies that I now get to share with other sweet babies and their families who are in need. As I calculated the sheer time and effort I put into this once-in-a-lifetime donation, I estimated no less than 38 hours of pumping, and an endless stream of dishes to keep everything clean and healthy. It’s all work I’d do again in a heartbeat.

I donated my milk in person at The Milk Bank’s headquarters and was given the grand tour of their impressive facility, seeing first-hand the hard work that goes into intaking, processing, and shipping out the liquid gold. If you’re considering donating, just start pumping what you can. Invest in an in-bra pump if you are able. And reach out to the donor team at The Milk Bank for support and questions as you pursue milk donation.

All of this for the potentially life-saving gift of human milk for fragile newborns. The incredible team at The Milk Bank works to ensure that donated milk is safe and ready for those that need it. And my donation can provide babies with approximately 684 feedings!

Generally, I prefer to give privately, but this gift and the organization’s mission are too important to keep to myself. Your gift is rare, needed, and doing so will make you feel even more like the superhero that you already are. 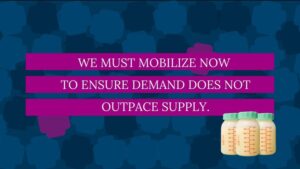 We must mobilize now to ensure demand does not outpace supply. 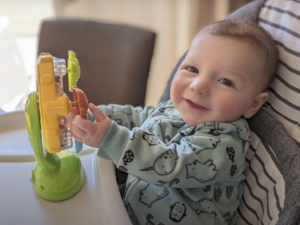