The death of an infant is terrible for both parents, but for many mothers, physical reminders such as lactation, can seem incongruent when motherhood has been cut short. These women can find solace in donating their milk to those in need.

Unlike the majority of breast-milk donors I visited during my research, there were no baby toys scattered across the floor, or a baby, in Liz’s house. Her baby, born 15 weeks premature, had lived for four hours and died in her arms.

Liz is one of 25 women who participated in my research into breast-milk donation to human milk banks. She and one other donor, Beth, donated breast milk after their prematurely-born infants died.

Both Liz and Beth found donating their breast milk beneficial; not only were they helping other hospitalised premature infants, it also helped them work with their personal grief.

Research from the United States shows that donating breast milk to a human milk bank has helped some bereaved women identify as a mother while grieving the loss of that motherhood.

During my interviews with Liz, she explained that her breasts started producing milk within days of her baby dying. She felt some discomfort and used a breast pump to express her milk to relieve the pressure.

Rather than throwing away her milk, she stored it in the freezer and donated it to the human milk bank. She continued this practice for a period of ten days, slowly allowing her breasts to stop producing milk.

She emphasised how expressing milk from her breasts allowed her time to grieve and cry in private and helped her to begin to heal physically, emotionally and spiritually:

People kept saying, ‘Oh, you’re so generous to donate,’ and honestly I just feel like I am the one who benefited, because it just helped me on all of these different levels.

Beth’s story was different. She continued to pump her breasts to actively produce milk for more than a month after the death of her baby.

For her, providing her breast milk to other premature babies allowed her to feel that something “good” was able to come out of her own personal tragedy:

It gave me something positive because I was helping other little babies in the same situation.

Clearly, donating breast milk to other preterm infants also helps some women find some positive meaning in the death of their own infant.

Mothers of very premature infants in neonatal intensive care need to express breast milk because their babies are too premature to breastfeed. Many of these women build up a store of frozen breast milk and, if their baby dies, some don’t want to throw it away.

Allowing these bereaved mothers to donate their breast milk is potentially healing for them as well as other premature infants.

After her baby dies, a mother’s body will continue to lactate, if she was breastfeeding or expressing milk while her baby was alive. The process of stopping lactation may take a couple of weeks of careful management.

So it’s extremely important for health professionals to discuss lactation with bereaved mothers to prevent complications, such as mastitis. The idea of donating their breast milk could also be raised at this time.

Women with living infants may be more likely to have conversations about lactation issues because they regularly visit health providers with their baby, such as their family doctor, early childhood centre, or community breast-feeding support group.

Friends, family and the community at large often find it difficult to talk to mothers about the death of their infant. And lactation after infant death is rarely discussed. It is perhaps for this reason that policies on bereaved milk donation to human milk banks have also been left off the map.

It’s time for Australia to develop national protocols that make it easy for bereaved mothers to donate their milk. Such protocols would need to ensure that federal and state governments, neonatal intensive care units, and human milk banks all recognise the potential benefit of milk donation.

We can be sure that every bereaved mother’s experience of breast-milk production, suppression and donation is different. Any protocols Australia develops for donating breast milk must include the diversity of women’s experiences.

Liz and Beth are just two women who benefited from donating their breast milk. It is time for other bereaved mothers to be given the chance to donate their breast milk to a human milk bank.

The Indiana Mothers’ Milk Bank welcomes donation of any size from any family who has experienced the loss of a baby. For more information about our Bereavement Program please click: Here

This article was originally published at The Conversation.
Read the original article. 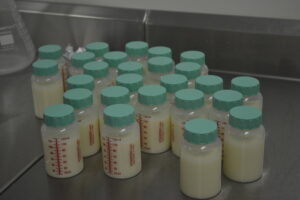 Why Do We Pasteurize Breast Milk Donations?
Menu