NEC Society reports that most families are not aware of NEC until their child receives the diagnosis.

This post was originally published in 2013 and features Dr. Kenneth Herrmann, Medical Director, Newborn Services, The Women’s Hospital & former member of our Medical Advisory Committee. Here he discusses the importance of a human milk diet for preemies, an important topic to review on World NEC Day.

“Premature infants tolerate human milk better than cow’s milk based formula because they have less emesis, less diaper rash and most important, less necrotizing enterocolitis. Necrotizing enterocolitis (NEC) is a serious and sometimes fatal intestinal complication of very low birth weight infants. The frequency of NEC ranges from 4 to 18% and depends on an individual NICU’s feeding practices. Since changing to an exclusively human milk diet, the rate of feeding associated NEC in our NICU has declined to 1%.

When we recommend using donor milk, most of the mothers tell us that they do not know about milk banks. They often wonder about the donor mothers. Similar to blood donation, donor mothers are screened for health safety. Milk donors are not paid for their milk.

While breastfeeding is a labor of love, the donor mothers labor above and beyond to provide a precious gift.” – Dr. Kenneth Herrmann

Layers of safety for the most fragile infants.

The Milk Bank screens, tests, analyzes and pasteurizes this donor milk before dispensing it to hospitals, NICUs and families. Donor milk is medicine for preemies, micro-preemies and other medically fragile infants. Extensive research has shown the value & according to the Academy of Breastfeeding Medicine (2017), PDHM is the next best option if mother’s own milk is unavailable. Additionally, the American Academy of Pediatrics (AAP) states: “If mother’s own milk is unavailable despite significant lactation support, PDHM from a milk bank should be used” (2012).

NEC Society reports that most families are not aware of NEC until their child receives the diagnosis. NEC Society is building a world without NEC, and we are proud to work alongside them.

Many states also recognize the public good of donor milk for fragile infants & a growing number of states and regions have passed legislation allowing private and public health insurance companies to cover donor milk for infants in need. In 2020, Illinois was the most recently added to this list of under a dozen. We applaud the public health experts and lawmakers in these areas & hope that more states will be added to this list! If you’re passionate about policy work in this area, and would like to know how to track and advocate for legislation in your state – look no further than the United States Breastfeeding Committee, mobilizing “action on legislative and policy opportunities that can help create a landscape of breastfeeding support across the United States.”

If you’re ready to become a lifesaving Milk Donor, get started with our pre-screen today!

Formula Shortage: Three Tips & How The Milk Bank Can Help You
How Donor Milk Bridges the Gap
2021 State of Infant Health in Indiana
A Gift Of Donor Milk In Honor Of The Hospital That Saved Me
Simple Strategies for Healthcare Providers Dealing with Burnout
We must mobilize now to ensure demand does not outpace supply. 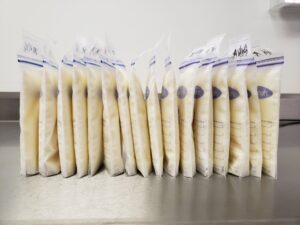