“She doesn’t have a mom here on earth, but there’s just dozens of moms who want to help her and don’t even know her.”

Tyler Mitchell, a police officer in Westfield, Indiana, is raising three children, including 9-month-old Amelia, following his wife’s passing from cancer. But he doesn’t feel alone. With the help of family, members of the community and The Milk Bank, he pursues strength during a tragedy.

“It’s a little hard to talk about it, but it’s worth it,” said Tyler.

Clara, his wife, had a difficult pregnancy and was considered high risk with a short cervix. They knew she would likely need to deliver early. They didn’t anticipate, however, ongoing nausea and significant weight loss.

“[The doctors] kept telling us she had a rare form of morning sickness,” said Tyler. “She was constantly sick – all the cancer symptoms were masked by the pregnancy, and we didn’t know until the day after Amelia was born.”

On February 17, little Amelia was born 3.5 weeks early, but healthy and thriving at just over 5 pounds. Tyler and Clara were thrilled that she did not need neonatal intensive care. While the hospital staff were monitoring Clara’s birth recovery, they discovered stage 4 stomach cancer which had spread to her gallbladder and lymph nodes. Clara needed immediate surgery.

“Clara nursed one time before starting chemotherapy,” said Tyler. “Then we tried three different versions [of formula], and [Amelia’s] stomach was irritable. She had bad constipation, then diarrhea, and she didn’t sleep very much. You could just hear her stomach churning all the time.”

As Clara’s health continued to deteriorate, family members and friends helped take care of the kids while Tyler stayed with his wife in the hospital. Coworkers and community members rallied together to assist the family.

“When everyone was in town, Clara’s cousin was still breastfeeding and asked if I wanted to try giving Amelia some breast milk,” said Tyler. “She took to it really well, and I was really open to the idea after that.”

A few coworkers offered their own frozen breast milk, and though Tyler was grateful, he was new to the police department and unaware of his coworkers’ health histories. It was another concern added to his stress.

“What if someone was taking a medicine [that could affect Amelia’s health]?”

On March 28, Clara passed away. While Tyler was busy making funeral arrangements, his sister-in-law, a lactation consultant, contacted The Milk Bank on Amelia’s behalf. Once approved through her pediatrician, The Milk Bank was able to arrange weekly shipments of pasteurized donation human milk (PDHM) to the Mitchell family.

“[The difference] was night and day – from crying, fussing and not wanting it, to a day or two being on breast milk. She is just thriving. It’s such a blessing to have that, and now I don’t have to worry about Amelia’s health.”

Through donations of breast milk from mothers across the Midwest, The Milk Bank pasteurizes milk and ships PDHM to hospital NICUs and outpatients like Amelia. Research indicates that next to a mother’s own milk, PDHM is the safest option for premature and fragile infants.

“This is hard on the kids, on me, on everybody, but I don’t have to worry about Amelia’s health, and that’s taken off my plate.”

Tyler is amazed at the generosity of the many people who have collectively supported him during this devastating time.

“I don’t have a wife. I can’t produce milk, and I can’t even buy it. To have someone provide it and deliver it…that’s a lot to offer,” said Tyler, baffled and grateful. “Being a police officer, I see so many people, and I help them on their worst days. [Donor mothers] don’t even see who they’re helping. It’s just huge.”

While still grieving, Tyler is making each day count. He encourages others to consider milk or financial donations to The Milk Bank to support families like his.

“[Donating breast milk] is as important as giving blood,” said Tyler. “Babies who need it are defenseless people, and to take care of a child is taking care of someone who can’t take care of themselves. I couldn’t be more supportive of what you guys have done.”

To donate financially to The Milk Bank, click here. Interested in becoming a donor mother? Get started today! 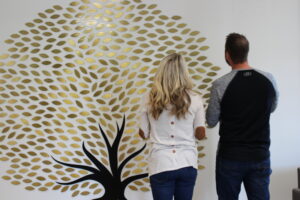 You Are My Sunshine: Remembering Gus